The largest gold nugget ever found in Oregon was discovered on the East Fork of Althouse Creek in the Illinois Valley in 1859. Its discover, a small Irish miner by the name of Mattie Collins found the whopper in the face of the stream bank under a large stump located about twelve feet about the normal waterline. Dubbed the “Collins Nugget”, it weighed in at a whopping seventeen pounds!

After Mattie Collins found the nugget, he lived in constant fear of being killed and robbed until he hired a fellow countryman of his by the name of Dorsey to help him transport the nugget out of the Althouse. With the nugget hidden in a sack on Dorsey’s back and Collins taking up the rear armed with a double barreled shotgun, the two men trekked down the old Althouse Trail (which still exists in places to this day, and upon which this writer has walked) and spirited the hunk of yellow metal out of the district under the cover of night. Every twenty or so feet, the two men would stop and peer into the darkness, mistaking every other stump or some other object for a highwayman, until finally, certain that it was a trick of the eye, Collins would tell Dorsey to go forward. Local legend has it that after selling the big yellow marvel to the smelter at Jacksonville for $3500, that awash in wealth, Mattie Collins celebrated his discovery until he drank himself to death.

Today, the Collins Nugget would be valued at about $375,000, though a gold nugget of this size and notoriety would certainly carry a hearty premium.

Other notable large nuggets found in Southern Oregon include: 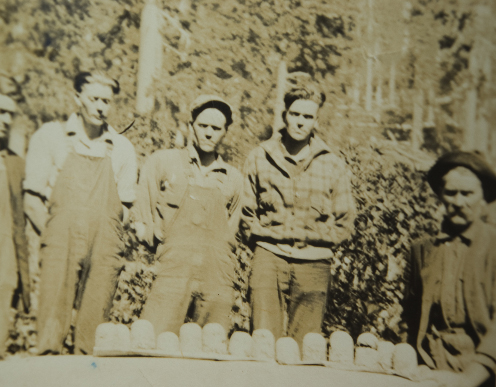 The crew at the famous Bunker Hill Mine on Silver Creek show off a two week clean up. The man at far right is pioneer Galice area miner, John Robertson. Photo courtesy of Sharon Crawford, who is the grand daughter of Orval Robertson, who discovered the Bunker Hill with his partner Ted McQueen in 1926.

Numerous discoveries of rich gold “pockets” which Southern Oregon is famous for have dotted the mining maps of this area, not limited to the fabulous Gold Hill Pocket discovered in 1860 by Thomas Chavner and partners which some say contained over 250,000 ounces of gold, the famous Revenue Pocket (2500 ounces) discovered on Kane Creek by Enos Rhoten, the SteamBoat Pocket in the Upper Applegate drainage and the famous Briggs Strike of 1904, as well as a rich discovery by Orval Robertson and Ted McQueen at the Bunker Hill Mine on Silver Creek exceeding some 5000 ounces in 1926. One piece of nearly solid gold ore from the Bunker Hill was so heavy that when it fell from the side of the tunnel, it broke the leg of a miner named Bill Mitchell who was operating a drill. The piece of ore was only a foot long, 6 inches wide and 3 inches thick, but it contained nearly 20 pounds of free milling gold. There was so much gold in this vein of ore that Mitchell called it the “Ham and Eggs Vein”, because of the amount of ham and egg breakfasts he had been able to buy with his share of the gold.

As recently as a half decade ago, a couple of pound sized nuggets were taken from a small tributary of the Applegate River, proof that the “big ones” are still out there if you are willing to work hard to find them.